It’s Super Bowl time again and that can mean only one thing for some – salty snacks, meat, lots of booze and a huge helping of football being played for all the marbles. For others it simply means cool and innovative television ads interrupted by a bunch of guys chasing a ball on a field.

Regardless which side of the fence (field?) you’re on, you can’t deny the creative display put on each year during the Super Bowl which this year costs a whopping $3 Million U.S. per spot. Unbelievable. Companies are banking on the exposure the commercial receives and possible buzz it generates will hopefully translate into money well spent.

For a look back at the last 38 years of Super Bowl ads, click the picture of the smirking quarterback below to go to a site dedicated to showcasing some of the best television ads ever produced for Super Sunday. (Hate to say it but I think this guy will be smirking again this coming Sunday – sorry Saints, I’m rooting for you though!) 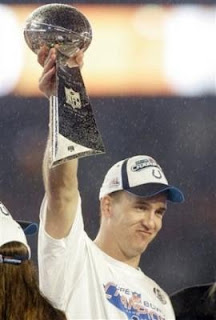 I’ve been in a bit of a football kick these last few days probably a reaction to my five week winning streak in fantasy football but it got me thinking of some classic commercials featuring football. Obviously the Superbowls have given us some classics in recent years but in my retro world only one sticks out as a true feel good classic.

Back when I played football in highschool, if you missed the first week of practice for whatever reason, you’d end up with equiptment leftovers that had about enough chance of protecting you as wrapping yourself in a layer of bubble wrap. Actually – I’d probably take my chances with the bubble wrap in retrospect. Football helmets shouldn’t bend should they? Hard to believe that players would wear things like the picture below to try and protect their melons while swarming each other for a ball.

Even ancient galdiators that wiped their butts with leaves knew enough not to go into battle with a piece of leather strapped to their heads and opted for good old fashioned metal to get the job done.

Of course with progess and modern times comes modern materials which ushers in a whole new era of advancements in equipment technology that culminates into the ultimate helmet for the masses. I’d never dream of facing any given Sunday without my trusty helmet.

Click the zesty salsa above to go to a website that offers a histroical perspective on every pro football helmet design from the golden age through to modern times including NFL, CFL, XFL, World Football League and more ! Quite the impressive collection.